You can find all the details here:

It's the old bug in Java on Mac that got triggered by the Java Agent being used by the IDE when starting the app. This message is harmless and is safe to ignore. Oracle developer's comment:

The message is benign, there is no negative impact from this problem since both copies of that class are identical (compiled from the exact same source). It is purely a cosmetic issue.

If it annoys you or affects your apps in any way (it shouldn't), the workaround for IntelliJ IDEA is to disable idea_rt launcher agent by adding idea.no.launcher=true into idea.properties (Help | Edit Custom Properties...). The workaround will take effect on the next restart of the IDE.

I don't recommend disabling IntelliJ IDEA launcher agent, though. It's used for such features as graceful shutdown (Exit button), thread dumps, workarounds a problem with too long command line exceeding OS limits, etc. Losing these features just for the sake of hiding the harmless message is probably not worth it, but it's up to you.

Since “this message is harmless”(see the @CrazyCoder's answer), a simple and safe workaround is that you can fold this buzzing message in console by IntelliJ IDEA settings: 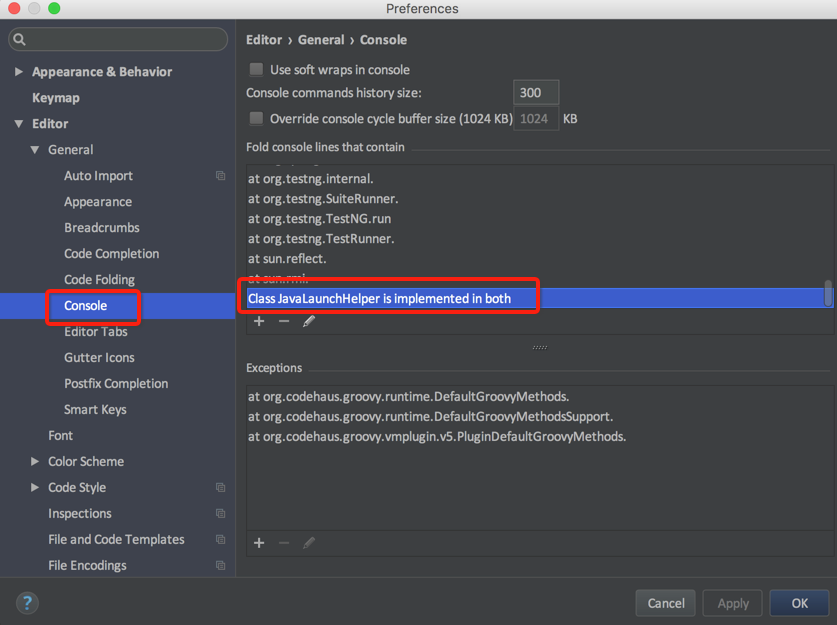 And you can unfold the message to check it again:

I am using Intellij Idea 2017 and I got into the same problem. What solved the problem for me was to simply

This happened to me when I installed Intellij IDEA 2017, go to menu Preferences -> Build, Execution, Deployment -> Debugger and disable the option: "Force Classic VM for JDK 1.3.x and earlier". This works to me.

I have found the other workaround: to exclude libinstrument.dylib from project path. To do so, go to the Preferences -> Build, Execution and Deployment -> Compiler -> Excludes -> + and here add file by the path in error message.