methods - Is Java "pass-by-reference" or "pass-by-value"?

Top 5 Answer for methods - Is Java "pass-by-reference" or "pass-by-value"?

Java is always pass-by-value. Unfortunately, when we deal with objects we are really dealing with object-handles called references which are passed-by-value as well. This terminology and semantics easily confuse many beginners.

In the example above aDog.getName() will still return "Max". The value aDog within main is not changed in the function foo with the Dog "Fifi" as the object reference is passed by value. If it were passed by reference, then the aDog.getName() in main would return "Fifi" after the call to foo.

In the above example, Fifi is the dog's name after call to foo(aDog) because the object's name was set inside of foo(...). Any operations that foo performs on d are such that, for all practical purposes, they are performed on aDog, but it is not possible to change the value of the variable aDog itself.

For more information on pass by reference and pass by value, consult the following SO answer: https://stackoverflow.com/a/430958/6005228. This explains more thoroughly the semantics and history behind the two and also explains why Java and many other modern languages appear to do both in certain cases.

I just noticed you referenced my article.

The Java Spec says that everything in Java is pass-by-value. There is no such thing as "pass-by-reference" in Java.

The key to understanding this is that something like

is not a Dog; it's actually a pointer to a Dog. The use of the term "reference" in Java is very misleading and is what causes most of the confusion here. What they call "references" act/feel more like what we'd call "pointers" in most other languages.

What that means, is when you have

you're essentially passing the address of the created Dog object to the foo method.

(I say essentially because Java pointers/references aren't direct addresses, but it's easiest to think of them that way.)

Suppose the Dog object resides at memory address 42. This means we pass 42 to the method.

if the Method were defined as

Now let's think about what happens outside the method:

Keeping in mind that myDog is a pointer, and not an actual Dog, the answer is NO. myDog still has the value 42; it's still pointing to the original Dog (but note that because of line "AAA", its name is now "Max" - still the same Dog; myDog's value has not changed.)

It's perfectly valid to follow an address and change what's at the end of it; that does not change the variable, however.

In C++, Ada, Pascal and other languages that support pass-by-reference, you can actually change the variable that was passed.

If Java had pass-by-reference semantics, the foo method we defined above would have changed where myDog was pointing when it assigned someDog on line BBB.

Java always passes arguments by value, NOT by reference.

Let me explain this through an example:

I will explain this in steps:

I hope you understand now how passing objects as arguments works in Java :)

Java is always pass by value, with no exceptions, ever.

So how is it that anyone can be at all confused by this, and believe that Java is pass by reference, or think they have an example of Java acting as pass by reference? The key point is that Java never provides direct access to the values of objects themselves, in any circumstances. The only access to objects is through a reference to that object. Because Java objects are always accessed through a reference, rather than directly, it is common to talk about fields and variables and method arguments as being objects, when pedantically they are only references to objects. The confusion stems from this (strictly speaking, incorrect) change in nomenclature.

So, when calling a method

So if you have doSomething(foo) and public void doSomething(Foo foo) { .. } the two Foos have copied references that point to the same objects.

Naturally, passing by value a reference to an object looks very much like (and is indistinguishable in practice from) passing an object by reference.

This will give you some insights of how Java really works to the point that in your next discussion about Java passing by reference or passing by value you'll just smile :-)

Step one please erase from your mind that word that starts with 'p' "_ _ _ _ _ _ _", especially if you come from other programming languages. Java and 'p' cannot be written in the same book, forum, or even txt.

Step two remember that when you pass an Object into a method you're passing the Object reference and not the Object itself.

Now think of what an Object's reference/variable does/is:

In the following (please don't try to compile/execute this...):

A picture is worth a thousand words: 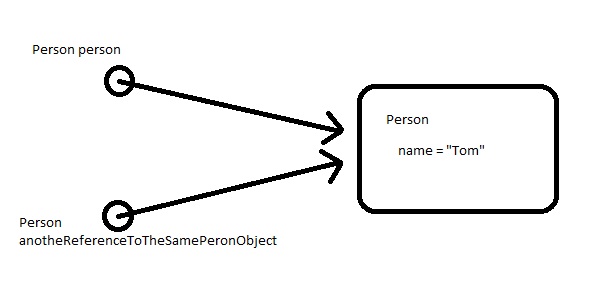 Note that the anotherReferenceToTheSamePersonObject arrows is directed towards the Object and not towards the variable person!

If you didn't get it then just trust me and remember that it's better to say that Java is pass by value. Well, pass by reference value. Oh well, even better is pass-by-copy-of-the-variable-value! ;)

Now feel free to hate me but note that given this there is no difference between passing primitive data types and Objects when talking about method arguments.

You always pass a copy of the bits of the value of the reference!

Java is pass-by-value because inside a method you can modify the referenced Object as much as you want but no matter how hard you try you'll never be able to modify the passed variable that will keep referencing (not p _ _ _ _ _ _ _) the same Object no matter what!

The changeName function above will never be able to modify the actual content (the bit values) of the passed reference. In other word changeName cannot make Person person refer to another Object.

Of course you can cut it short and just say that Java is pass-by-value!