Top 5 Answer for ios - Importing CommonCrypto in a Swift framework

Something a little simpler and more robust is to create an Aggregate target called "CommonCryptoModuleMap" with a Run Script phase to generate the module map automatically and with the correct Xcode/SDK path: 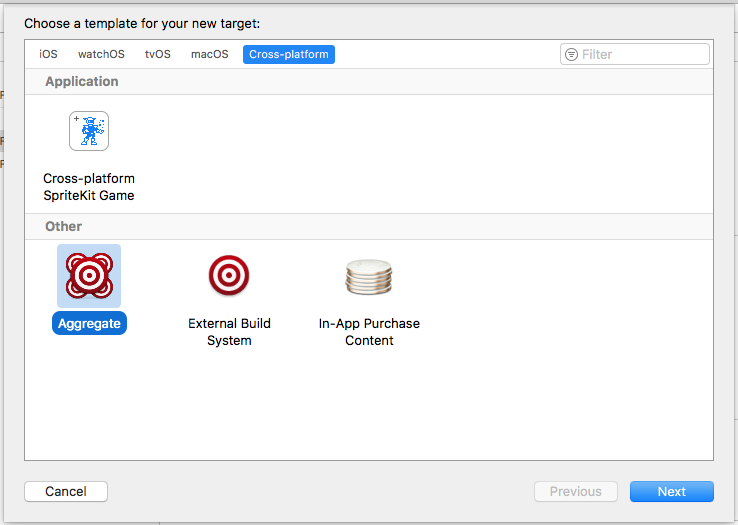 The Run Script phase should contain this bash:

Using shell code and ${SDKROOT} means you don't have to hard code the Xcode.app path which can vary system-to-system, especially if you use xcode-select to switch to a beta version, or are building on a CI server where multiple versions are installed in non-standard locations. You also don't need to hard code the SDK so this should work for iOS, macOS, etc. You also don't need to have anything sitting in your project's source directory.

After creating this target, make your library/framework depend on it with a Target Dependencies item:

This will ensure the module map is generated before your framework is built.

macOS note: If you're supporting macOS as well, you'll need to add macosx to the Supported Platforms build setting on the new aggregate target you just created, otherwise it won't put the module map in the correct Debug derived data folder with the rest of the framework products.

Next, add the module map's parent directory, ${BUILT_PRODUCTS_DIR}/CommonCryptoModuleMap, to the "Import Paths" build setting under the Swift section (SWIFT_INCLUDE_PATHS):

Remember to add a $(inherited) line if you have search paths defined at the project or xcconfig level.

That's it, you should now be able to import CommonCrypto

Xcode 10 now ships with a CommonCrypto module map making this workaround unnecessary. If you would like to support both Xcode 9 and 10 you can do a check in the Run Script phase to see if the module map exists or not, e.g.

You can actually build a solution that "just works" (no need to copy a module.modulemap and SWIFT_INCLUDE_PATHS settings over to your project, as required by other solutions here), but it does require you to create a dummy framework/module that you'll import into your framework proper. We can also ensure it works regardless of platform (iphoneos, iphonesimulator, or macosx).

You should now be able to build, run and import CommonCrypto in your wrapper framework.

For an example, see how SQLite.swift uses a dummy sqlite3.framework.

I found a GitHub project that successfully uses CommonCrypto in a Swift framework: SHA256-Swift. Also, this article about the same problem with sqlite3 was useful.

Based on the above, the steps are:

1) Create a CommonCrypto directory inside the project directory. Within, create a module.map file. The module map will allow us to use the CommonCrypto library as a module within Swift. Its contents are:

3) Finally, import CommonCrypto inside your Swift files as any other modules. For example:

The module map is not platform independent (it currently points to a specific platform, the iOS 8 Simulator). I don't know how to make the header path relative to the current platform.

Updates for iOS 8 <= We should remove the line link "CommonCrypto", to get the successful compilation.

I kept getting the following build error:

Unless I removed the line link "CommonCrypto" from the module.map file I created. Once I removed this line it built ok.

This answer discusses how to make it work inside a framework, and with Cocoapods and Carthage

For those getting header not found, please take a look https://github.com/onmyway133/Arcane/issues/4 or run xcode-select --install

ios - Vertically align text to top within a UILabel
ios - What's the difference between the atomic and nonatomic attributes?
ios - How can I make a UITextField move up when the keyboard is present - on starting to edit?
ios - Using Auto Layout in UITableView for dynamic cell layouts & variable row heights
ios - Transport security has blocked a cleartext HTTP
ios - Passing data between view controllers
How can I check for an active Internet connection on iOS or macOS?
ios - How do I sort an NSMutableArray with custom objects in it?
ios - performSelector may cause a leak because its selector is unknown
ios - Xcode - How to fix 'NSUnknownKeyException', reason: … this class is not key value coding-compliant for the key X" error?
ios - How do I check if a string contains another string in Objective-C?
ios - How can I disable the UITableView selection?
ios - How can I develop for iPhone using a Windows development machine?
xcode - How to change the name of an iOS app?
swift - How to change Status Bar text color in iOS
ios - Constants in Objective-C
ios - How do I animate constraint changes?
ios - How do I convert an NSString value to NSData?
ios - Xcode error "Could not find Developer Disk Image"
objective c - How to check iOS version?
Xcode 7 error: "Missing iOS Distribution signing identity for ..."
ios - Get the length of a String
ios - Loaded nib but the 'view' outlet was not set
ios - Xcode process launch failed: Security
ios - Can I embed a custom font in an iPhone application?
ios - How do I create delegates in Objective-C?
ios - How do you trigger a block after a delay, like -performSelector:withObject:afterDelay:?
ios - Split a String into an array in Swift?
ios - Eliminate extra separators below UITableView
ios - Placeholder in UITextView