You want the typeof operator. Specifically:

The typeof operator will check if the variable is really undefined.

The typeof operator, unlike the other operators, doesn't throw a ReferenceError exception when used with an undeclared variable.

However, do note that typeof null will return "object". We have to be careful to avoid the mistake of initializing a variable to null. To be safe, this is what we could use instead:

For more info on using strict comparison === instead of simple equality ==, see:
Which equals operator (== vs ===) should be used in JavaScript comparisons?

In many cases, using:

will do the job for you!... this will check these below cases:

So it will cover off kind of all cases, but there are always weird cases which we'd like to cover as well, for example, a string with spaces, like this ' ' one, this will be defined in javascript as it has spaces inside string... for example in this case you add one more check using trim(), like:

Also, these checks are for values only, as objects and arrays work differently in Javascript, empty array [] and empty object {} are always true.

I create the image below to show a quick brief of the answer: 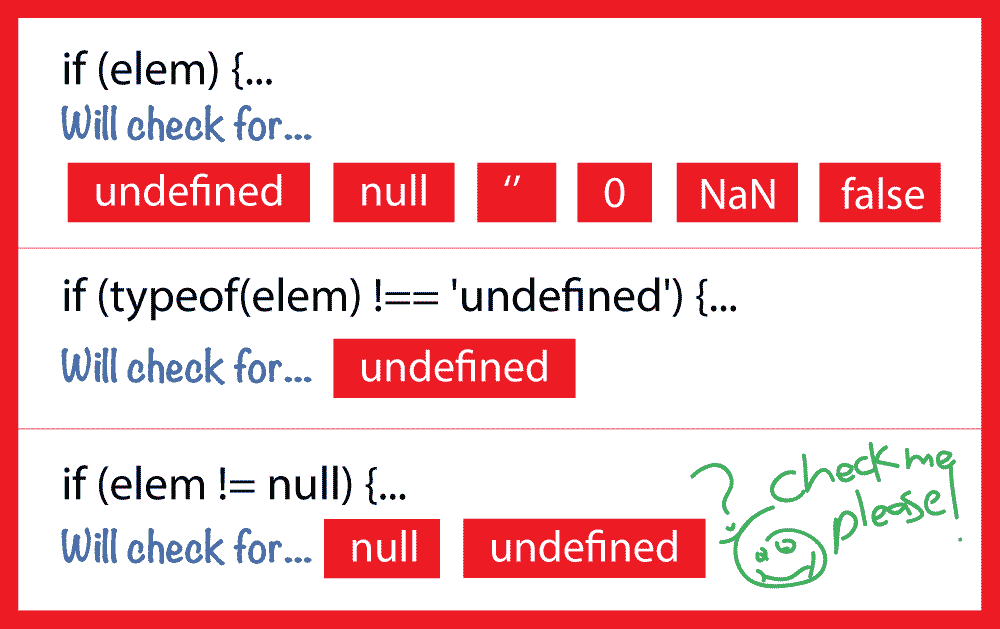 In JavaScript, a variable can be defined, but hold the value undefined, so the most common answer is not technically correct, and instead performs the following:

That may suffice for your purposes. The following test has simpler semantics, which makes it easier to precisely describe your code's behavior and understand it yourself (if you care about such things):

This, of course, assumes you are running in a browser (where window is a name for the global object). But if you're mucking around with globals like this you're probably in a browser. Subjectively, using 'name' in window is stylistically consistent with using window.name to refer to globals. Accessing globals as properties of window rather than as variables allows you to minimize the number of undeclared variables you reference in your code (for the benefit of linting), and avoids the possibility of your global being shadowed by a local variable. Also, if globals make your skin crawl you might feel more comfortable touching them only with this relatively long stick.

In the majority of cases you would use:

Unlike a simple if (elem), it allows 0, false, NaN and '', but rejects null or undefined, making it a good, general test for the presence of an argument, or property of an object.

The other checks are not incorrect either, they just have different uses:

Also useful is a strict comparison against undefined:

However, because the global undefined can be overridden with another value, it is best to declare the variable undefined in the current scope before using it:

A secondary advantage of this method is that JS minifiers can reduce the undefined variable to a single character, saving you a few bytes every time.