How to resolve merge conflicts in a Git repository?

Top 5 Answer for How to resolve merge conflicts in a Git repository?

It opens a GUI that steps you through each conflict, and you get to choose how to merge. Sometimes it requires a bit of hand editing afterwards, but usually it's enough by itself. It is much better than doing the whole thing by hand certainly.

Below is the sample procedure to use vimdiff for resolve merge conflicts. Based on this link

This will set vimdiff as the default merge tool.

Step 3: You will see a vimdiff display in following format

LOCAL – this is file from the current branch

BASE – common ancestor, how file looked before both changes

REMOTE – file you are merging into your branch

MERGED – merge result, this is what gets saved in the repo

You can navigate among these views using ctrl+w. You can directly reach MERGED view using ctrl+w followed by j.

More information about vimdiff navigation is here and here.

Step 4. You could edit the MERGED view the following way

If you want to get changes from REMOTE

If you want to get changes from BASE

If you want to get changes from LOCAL

Step 5. Save, Exit, Commit and Clean up

:wqa save and exit from vi

Here's a probable use case, from the top:

You're going to pull some changes, but oops, you're not up to date:

So you get up-to-date and try again, but have a conflict:

So you decide to take a look at the changes:

Oh my, oh my, upstream changed some things, but just to use my changes...no...their changes...

And then we try a final time

I find merge tools rarely help me understand the conflict or the resolution. I'm usually more successful looking at the conflict markers in a text editor and using git log as a supplement.

Here are a few tips:

The best thing I have found is to use the "diff3" merge conflict style:

The middle section is what the common ancestor looked like. This is useful because you can compare it to the top and bottom versions to get a better sense of what was changed on each branch, which gives you a better idea for what the purpose of each change was.

If the conflict is only a few lines, this generally makes the conflict very obvious. (Knowing how to fix a conflict is very different; you need to be aware of what other people are working on. If you're confused, it's probably best to just call that person into your room so they can see what you're looking at.)

If the conflict is longer, then I will cut and paste each of the three sections into three separate files, such as "mine", "common" and "theirs".

Then I can run the following commands to see the two diff hunks that caused the conflict:

This is not the same as using a merge tool, since a merge tool will include all of the non-conflicting diff hunks too. I find that to be distracting.

Somebody already mentioned this, but understanding the intention behind each diff hunk is generally very helpful for understanding where a conflict came from and how to handle it.

This shows all of the commits that touched that file in between the common ancestor and the two heads you are merging. (So it doesn't include commits that already exist in both branches before merging.) This helps you ignore diff hunks that clearly are not a factor in your current conflict.

Verify your changes with automated tools.

If you have automated tests, run those. If you have a lint, run that. If it's a buildable project, then build it before you commit, etc. In all cases, you need to do a bit of testing to make sure your changes didn't break anything. (Heck, even a merge without conflicts can break working code.)

Plan ahead; communicate with co-workers.

Planning ahead and being aware of what others are working on can help prevent merge conflicts and/or help resolve them earlier -- while the details are still fresh in mind.

For example, if you know that you and another person are both working on different refactoring that will both affect the same set of files, you should talk to each other ahead of time and get a better sense for what types of changes each of you is making. You might save considerable time and effort if you conduct your planned changes serially rather than in parallel.

For major refactorings that cut across a large swath of code, you should strongly consider working serially: everybody stops working on that area of the code while one person performs the complete refactoring.

If you can't work serially (due to time pressure, maybe), then communicating about expected merge conflicts at least helps you solve the problems sooner while the details are still fresh in mind. For example, if a co-worker is making a disruptive series of commits over the course of a one-week period, you may choose to merge/rebase on that co-workers branch once or twice each day during that week. That way, if you do find merge/rebase conflicts, you can solve them more quickly than if you wait a few weeks to merge everything together in one big lump.

If you're unsure of a merge, don't force it.

Merging can feel overwhelming, especially when there are a lot of conflicting files and the conflict markers cover hundreds of lines. Often times when estimating software projects we don't include enough time for overhead items like handling a gnarly merge, so it feels like a real drag to spend several hours dissecting each conflict.

In the long run, planning ahead and being aware of what others are working on are the best tools for anticipating merge conflicts and prepare yourself to resolve them correctly in less time.

Merge conflicts happens when changes are made to a file at the same time. Here is how to solve it.

Here are simple steps what to do when you get into conflicted state:

See also: Resolving a merge conflict from the command line at GitHub

I've successfully used DiffMerge which can visually compare and merge files on Windows, macOS and Linux/Unix.

It graphically can show the changes between 3 files and it allows automatic merging (when safe to do so) and full control over editing the resulting file. 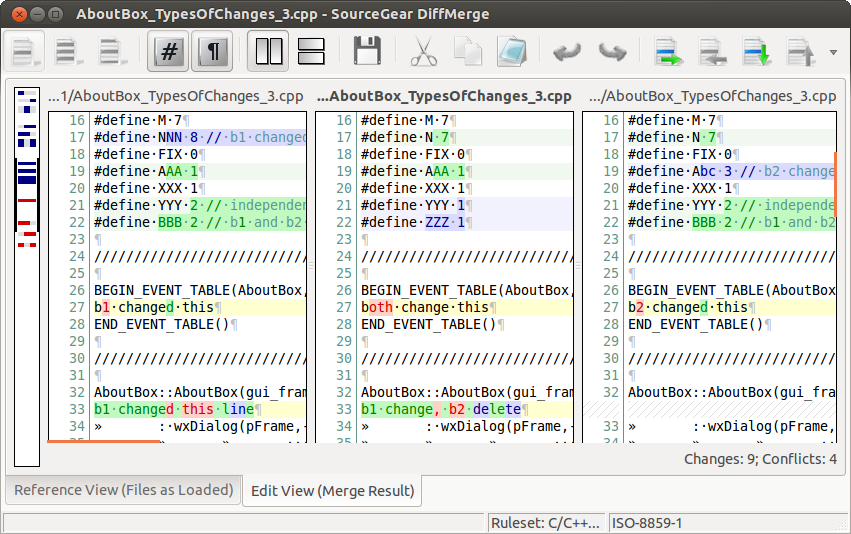 On macOS you can install via:

And probably (if not provided) you need the following extra simple wrapper placed in your PATH (e.g. /usr/bin):

Then you can use the following keyboard shortcuts:

Alternatively you can use opendiff (part of Xcode Tools) which lets you merge two files or directories together to create a third file or directory.

Top 3 video Explaining How to resolve merge conflicts in a Git repository?